The AW109 is a lightweight twin-engine helicopter, known for its speed, elegant appearance and ease of control. Since entering commercial service, several revisions and iterations have been made, frequently introducing new avionics and engine technologies. AgustaWestland have promoted the type for its multirole capabilities and serviceability. The type has proven highly popular with VIP/corporate customers; according to AgustaWestland, 50% of all of the AW109 Power variant had been sold in such configurations. Other roles for the AW109 have included emergency medical services, law enforcement, homeland security missions, harbor pilot shuttle duty, search and rescue, maritime operations, and military uses.In 2008, AgustaWestland claimed the AW109 to be “one of the industry’s best-selling helicopters”.

A range of turboshaft powerplants have been used to power the numerous variants of the AW109, from the original Allison 250-C14 engines to the Turbomeca Arriel 1K1 and Pratt & Whitney Canada PW206 of more modern aircraft. Powerplants can be replaced or swapped for during airframe overhauls, resulting in increasing lifting capacity and other performance changes. In the case of single-engine failure, the AW109 is intended to have a generous power reserve even on a single engine. The engines drive a fully articulated four-blade rotor system. Over time, more advanced rotor blade designs have been progressively adopted for the AW109’s main and tail rotors, such as composite materials being used to replace bonded metal, these improvements have typically been made with the aim of reducing operating costs and noise signature. According to Rotor&Wing, the type is well regarded for its “high, hot, and heavy” performance.

According to AgustaWestland, the AW109 Power features various advanced avionics systems, these include a three-axis autopilot, an auto-coupled Instrument Landing System, integrated GPS, a Moving Map Display, weather radar, and a Traffic Alerting System. These systems are designed to reduce pilot workload (the AW109 can be flown under single or dual-pilot instrument flight rules (IFR)) and enable the use of night vision goggles(NVG) to conduct day-or-night operations. The AW109 has a forced trim system which can be readily and selectively activated by the controlling pilot using triggers located on the cyclic and collective which hold the control inputs at the last set position if activated. All critical systems are deliberately redundant for fail-safe operations; the hydraulic system, hydraulic actuators, and electrical system are all dual-redundant, while the power inverters are triple-redundant. The AW109 also has reduced maintenance requirements due to an emphasis on reliability across the range of components used.

Some models of the AW109 feature the “quick convertible interior”, a cabin configuration designed to be flexibly re-configured to allow the rotorcraft to be quickly adapted for different roles, such as the installation or removal of mission consoles or medical stretchers. Mission-specific equipment can also be installed in the externally accessible separate baggage compartment, which can be optionally expanded. Optional cabin equipment includes soundproofing, air conditioning, and bleed air heating. Aftermarket cabin configurations are offered by third parties; Pininfarina and Versace have both offered designer interiors for the AW109. While Aerolite Max Bucher has developed a lightweight emergency medical service interior. The majority of AW109s are fitted with a retractable wheeled tricycle undercarriage, providing greater comfort than skids and taxiing capability.For shipboard operations, the wheeled landing gear is reinforced, deck mooring points are fixed across the lower fuselage, and extensive corrosion protection is typically applied. 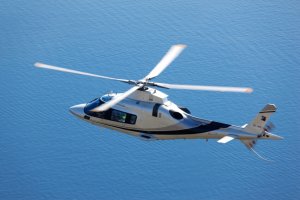