IN ITS 50TH YEAR IN OPERATION, TOWNSEND LEATHER LOOKS AHEAD WITH EXPANSION INTO NEWLY-RESTORED BUILDING

AeroClassifieds > Aircraft News > Articles and Guides > Jet Ownership > IN ITS 50TH YEAR IN OPERATION, TOWNSEND LEATHER LOOKS AHEAD WITH EXPANSION INTO NEWLY-RESTORED BUILDING

IN ITS 50TH YEAR IN OPERATION, TOWNSEND LEATHER LOOKS AHEAD WITH EXPANSION INTO NEWLY-RESTORED BUILDING 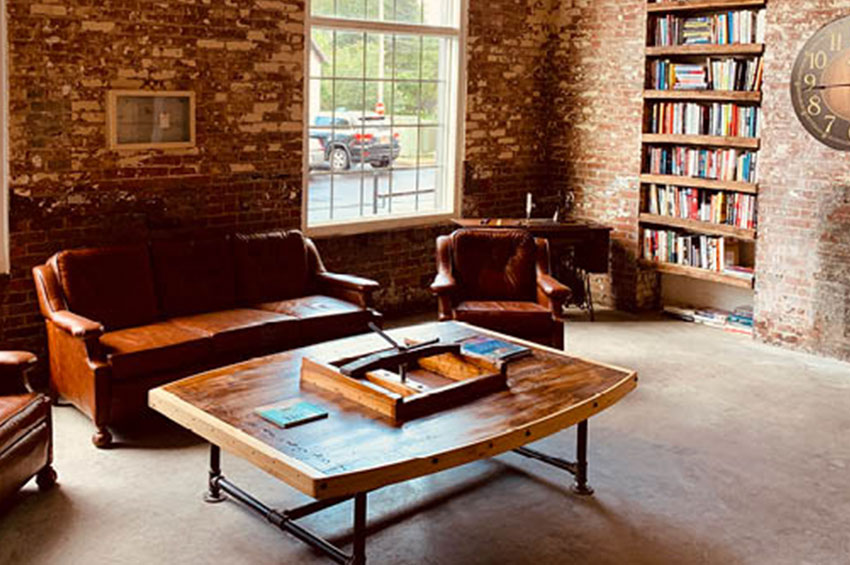 October 17, 2019
Posted by: AeroClassifieds
No Comments

IN ITS 50TH YEAR IN OPERATION, TOWNSEND LEATHER LOOKS AHEAD WITH EXPANSION INTO NEWLY-RESTORED BUILDING, LINKING THE PAST WITH THE FUTURE

In 2019, Townsend Leather celebrated its 50th Anniversary.  This year also marked another milestone for the company with its expansion into a newly-restored building.  This building, which the company has affectionately nicknamed “The Stitch,” is Townsend’s new home for sales, marketing, accounting, human resources and management teams along with warehouse of raw materials.  The multi-building connected complex that formerly served as the Diana Knitting Mill was originally built in 1900 and had been vacant for 16 years before Townsend purchased the property in late 2017 and undertook a massive renovation project.

The company secured a grant to help with this huge undertaking and the first major part of the renovation was a new roof and refitting of windows.  As far as the interior, Townsend salvaged the wood and local artisans combined the floorboards with other reclaimed pieces of leather milling, sewing and knitting equipment and materials to create new pieces of furniture for use through The Stitch, highlighting the heritage of both Townsend and the Diana Knitting Mill.

Says, Tim Beckett, Townsend Leather Senior Vice President and lead on the renovation project, “You don’t buy wood from 1900 every day of the week, so you’ll see here some of the pieces of furniture that we built out of the floors.  What we tried to do is bring in a lot of the old stuff from our mill and a couple of other mills, but also mix in with knitting, so you’ll see some sewing machines around.”

Throughout The Stitch original wooden beams and brick walls are featured prominently in open concept spaces being utilized for modern office areas and conference rooms.  On the second and third floors, the original wooden floors remain intact and Townsend purchased reclaimed wooden doors where called for to maintain the archtitectural aesthetic. Beckett says, “We wanted to make sure we kept the building looking like an old building.” And of course leather is a another common feature of the décor in the form of large and small swatches, samples and photos of finished pieces Townsend’s leather has been turned into and fixtures and pieces of furniture covered in the material. Even though the bulk of leather-making still occurs at Townsend’s Townsend Avenue location a few minutes across town, The Stitch is a showcase for what the company is capable of producing.

While the interior of The Stitch has a timeless feel through the mix of antique and contemporary design work, Beckett noted that all new gas and electric was installed in the building, along with a three stop elevator to bring the building into compliance with the Americans with Disabilities Act.  Only a warehouse on the second floor for storing Townsend’s raw production materials has a modern feel featuring newly installed metal racks and lighting fixtures.

The need for storage space motivated Townsend to purchase the Diana Knitting Mill complex as the company sought a location to warehouse hides purchased from Germany where the highest grade leathers in the world are produced.  Townsend finishes the materials according to contracts with designers and manufacturers in the residential, hospitality, contract, aviation, and transportation markets around the world.

The company considered opening warehouse space in Germany or in New York City before deciding to secure a space locally.  Townsend originally sought only 20,000 square feet but ultimately purchased the 66,000-square-foot Diana Knitting Mill complex due to the look of the building and the potential the management team saw when they walked through it.

The building features a variety of spaces, including several areas that Townsend will market as leasable office space on the first and third floors.  Beckett said Townsend has already lined up a tenant with 26 employees to occupy a roughly 4,000 square foot space on the first floor.

In moving the 50 year old company forward, Beckett said executives carefully contemplated Townsend’s future, coming to the conclusion that the building would be ideal for supporting growth or contraction by the company as the building is actually composed of two tax parcels that could be divided if the company sought to downsize in the future by relocating the company offices.  “We could split the building in half, we have separate utilities for both.  WE could rent that all out for office space and just use this for storage.  We were trying to think about where we’re going to be and what we’re going to do.”

If the company continues to grow, there will be plenty of room at The Stitch for expansion.

Townsend Leather is a third-generation, U.S.-based family business and manufacturer of upholstery hides and decorative leathers, supplying the A & D Residential, Hospitality, Home Furnishings, Corporate, business, and Commercial Aviation, Motorcoach, and Yachting markets internationally. The company prides itself on pushing the boundaries of what is possible from the perspectives of color, texture, pattern and cutting-edge design and technological opportunities.  www.townsendleather.com