ADS-B In An Older Plane?

ADS-B In An Older Plane? 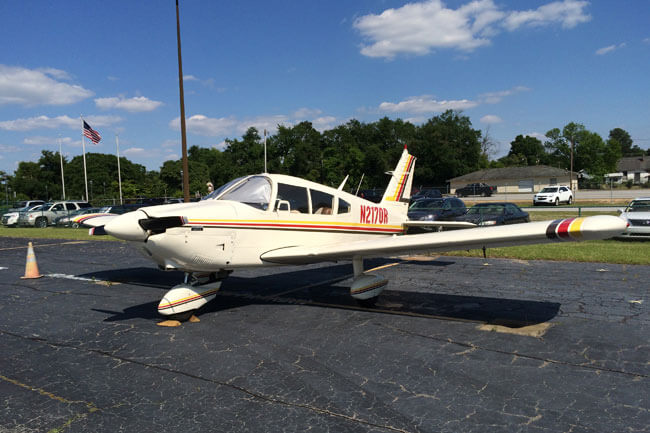 February 21, 2019
Posted by: AeroClassifieds
No Comments

Sometimes getting around to doing something isn’t as much a matter of planning or decisiveness as it is pure circumstance. Such was the case for me when I got the message that it was time to do some transponder work on my vintage Cherokee.

Like many VFR pilots, I request flight following whenever I fly cross-country. For a number of reasons, it’s great having ATC be aware of who you are and where you are going. Last fall, as my wife and I flew along in our Cherokee to Myrtle Beach for our anniversary we were doing just that, talking with ATC with a squawk code and occasional traffic call-outs. We were cruising at a very VFR-like 3,500 feet when out of the blue the controller asked me to verify my altitude, saying it was much lower than the 3,500-foot figure my transponder was reporting. Immediately, I felt that familiar ache in my wallet that pilots know all too well. I knew that something was going wrong with my transponder.

As a senior member of the general aviation fleet, my Cherokee came equipped with older avionics when I took ownership. My transponder was a Narco 50A, which was state-of-the-art equipment back in 1972, but today, not so much. Still, it had been working fine. When I bought my Cherokee in November of 2014, I witnessed the testing of the unit as it passed with flying colors.

It limped along for a little while until it was time for the plane’s annual inspection. While it was in the shop, I asked for a transponder check, since it had been more than 24 calendar months since the last test. I was hoping that the problem would be with the—less expensive—encoder. The guys in the avionics shop were very helpful, and brought out their test equipment and fired it up. Yet no matter where they placed their antenna, the transponder failed the automated test, due to low signal strength. After several attempts at troubleshooting, including the time honored “remove and reinstall” technique, it was obvious that it was time for me to make a decision. Rather than have my old unit repaired, or replaced, I chose to upgrade to an ADS-B Out unit. With the high cost of even yellow-tagged used Mode-C transponders and the crazy high price of repairing one, a new ADS-B Out-capable unit was a bargain.

As we all know by now, the requirement for an ADS-B Out transponder is only three years in the future if you fly in the requisite airspace, which almost everybody does. I know I do. Even if I didn’t, since I don’t know what my future missions will require, I consider it a wise decision to perform the upgrade. Not only are you covered, but there are other benefits, including traffic and weather capabilities when you also get the complimentary data from the FAA. I’ll tell you, too, that once you have flown with ADS-B information in your cockpit, you realize how busy our skies have become in certain areas of the country. Currently, nearby traffic is only available on your ADS-B receiver if an aircraft with ADS-B Out triggers the transmission from a tower. So you know there’s even more of it out there.

There are several very good choices on the market today, but I chose the Stratus ESG to match my Stratus 2S, which is my portable, non-certified ADS-B receiver. The unit comes complete with everything necessary, except the cable from the GPS antenna to the panel. It even fit in the same location as my old transponder. I also chose to upgrade my encoder to a new unit, since it provided much better accuracy, and the installation requires only three wires, instead of the multi-wire “Gray code.”

My installation at Augusta Aviation was straightforward and only took a couple of days. They gave me a fixed price for installation that was reasonable, and I assisted and observed the installation. I chose to install my GPS antenna behind the baggage compartment bulkhead to avoid manipulating my fragile, original-equipment headliner. I removed the rear bulkhead during the annual inspection in order to replace my aluminum battery cable, but that was not necessary for this installation. The antenna must be installed so that it is not shadowed by any of the other antennas on the fuselage, but we were able to find a suitable location with little problem. 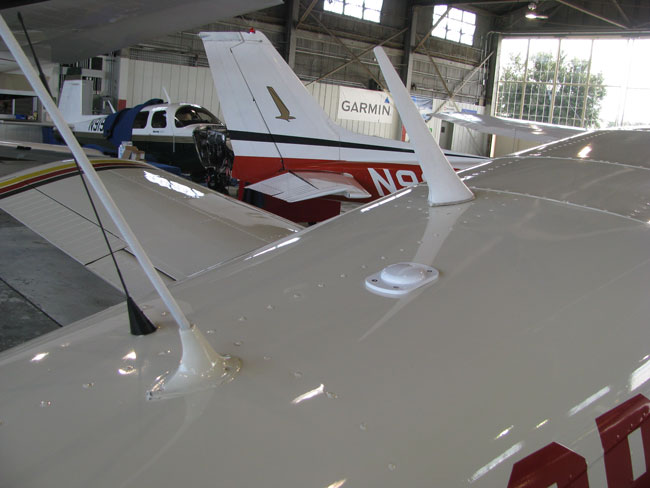 We routed the new antenna cable under the baggage compartment deck, through the rear seat area, and along the right side of the fuselage following existing cable paths. We pulled the right side interior panel to gain access to the cable tray. In most cases, the existing cable from the transponder to the antenna on the belly of the airplane can be reused. We’d already replaced my transponder cable with a new one during our fruitless troubleshooting efforts.

ADS-B definitely provides a significant amount of situational awareness of other aircraft near you. It gives you location and altitude information for the nearby traffic. As an example, I flew into Beaufort, S.C. a few weeks ago, and was able to quickly spot a fast-approaching airplane that was also inbound to Beaufort from behind, below and to my left. We were separated by a few thousand feet. I received a warning from ATC after I had already spotted the traffic. It was a good feeling to know where that traffic was; unfortunately, there could have been other airplanes that were not reporting their location in front of me. It was a beautiful VFR day, and seeing and avoiding was not a problem, but I would have been more comfortable knowing my path was clear of traffic.

I would encourage everyone to stop putting off the inevitable and make the decision to upgrade to your choice of ADS-B out before time runs out. The closer you get to the required date, the longer the line will be for installation by your avionics shop. This is not to mention the knowledge of all the other small airplanes sharing the sky with you.

This cat knows exactly where you’re at.

If you’re looking for a basic ADS-B transponder that satisfies the mandate at the bare minimum, you can skip this one, because the L3 Lynx doesn’t fit the description. The Lynx does do everything the mandate requires. It’s an ADS-B Out box that checks the FAA boxes. But it’s so much more than that, too, including a standalone ADS-B In solution.

Lynx might best be described as a multifunction ADS-B transceiver and more, since it also boasts a built-in WAAS/GPS receiver. The most noticeable feature, though, is its color touchscreen display that shows a lot of information, including free FIS-B weather and ADS-B traffic, too. It’ll display winds aloft, AIRMETS, SIGMETS and other text weather products, and you can even use it to display lightning data from a Stormscope WX-500. It has optional terrain awareness and L3’s ATAS traffic advisory system. The ATAS is pretty slick…the Lynx is the only ADS-B box with TSO-C195b, which allows it to provide audible callouts below 2,000 feet. It’s compatible with a number of third-party aviation apps, including ForeFlight Mobile, WingX Pro7 and FlyQ.

Lynx is a one-box replacement for your old Mode-C transponder while also fulfilling the ADS-B mandate, but so much more. The downside is that it’s also the most expensive product in this lineup at a base price of $6,170, which includes the WAAS/GPS antenna Install kit and WiFi module. The fully equipped price is $11,550. Then again, it’s also the most capable ADS-B unit available, too, and by a lot.

If you’re short on panel space, or simply want to open up some room in your stack for a bigger display, then Trig Avionics TT22 might be for you. The TT22 is a Mode-S and ADS-B 1090-ES transponder that’s a pure ADS-B Out solution to satisfy the mandate at a low cost in both dollars and panel space, even for planes operating in the flight levels. It also features a built-in altitude encoder. The same capability is also available in a standard wide panel-mount form factor as the Trig TT31, which is a slide-in replacement for the Bendix/King KT76A, KT76C and KT78A transponders.

Garmin’s single-unit ADS-B In and Out provides traffic, weather and more.

The Garmin GTX 345 is an ADS-B option that’s anything but basic. In addition to 1090-ES ADS-B Out and Mode S transponder capabilities, the unit also provides dual-link (978 and 1090 MHz) ADS-B In and subscription-free FIS-B weather on compatible displays. The compatible display list—Garmin G500/600, GTN series, and select G1000 systems, to name a few—doesn’t only include cockpit units, however. The GTX 345 can also wirelessly stream weather, traffic, GPS position, and backup attitude data to Garmin’s handheld aera 796/795 and 660, as well as many tablet and mobile devices via the Gamin Pilot and ForeFlight apps.

With the ADS-B weather link, you can access NEXRAD imagery, METARs, TAFs, winds and temperatures aloft, PIREPs, and NOTAMs in flight. With the traffic alerts, you can also get audio call-outs for potential traffic conflicts.

The Avidyne AXP340 is a panel-mounted ADS-B Out solution that has a number of popular features at a competitive price. As base, it’s an ADS-B 1090-ES and Mode-S transponder that satisfies the upcoming mandate. Features include a direct-entry numeric keypad, pressure altitude and GPS Lat/Lon readout, flight ID entry, one-touch VFR code entry, a stopwatch timer, flight timer, and altitude alerter.

For those looking to swap out old transponders, the AXP340 is a slide-in replacement for the KT76A/KT78A, two extremely popular Bendix/King transponders. In terms of GPS compatibility, the AXP340 works with both Avidyne’s IFD series and Garmin’s GNS430W/530W series. The unit retails at $2,995, but costs $2,600 when purchased directly from the manufacturer.

If you’re looking for an ADS-B In solution that’s independent of your ADS-B Out system, Avidyne has its SkyTrax100 ($2,499) ADS-B receiver that will display ADS-B weather and traffic on the company’s IFD 440, 540 and 550 displays, as well as on an iOS device running Avidyne’s IFD100 iPad app. For its customers with IFD multifunction navigators, Avidyne offers its AXP322 remote-mount transponder, which can be controlled through the IFD unit.

A simple solution for older aircraft.

The Stratus ESG, made by Appareo, is an ADS-B Out option for non-glass panel aircraft. The ESG is a 1090-ES transponder with a built-in WAAS/GPS. The unit can reuse existing transponder antennae and altitude encoders—it accepts both serial and parallel inputs, so it will work with most altitude encoders. The ESG is sized to easily replace common older transponders like the KT76A.

Denny Kotz is a retired Mechanical Engineer who, after a lifetime of dreaming about flying, earned his certificate at the age of 63.  A native of Sandusky, Ohio, he has lived in North Augusta, South Carolina since 1981. Another one of his passions is performing music, and he is a member of the Flying Musicians Association.

Want more stories and information about buying, owning, and maintaining your own airplane? Check out our Aircraft Ownership Archive.