The Cessna 182 Skylane is an American four-seat, single-engined light airplane, built by Cessna of Wichita, Kansas. It has the option of adding two child seats, installed in the baggage area.

Introduced in 1956, the 182 has been produced in a number of variants, including a version with retractable landing gear, and is the second most popular Cessna model still in production, after the 172. 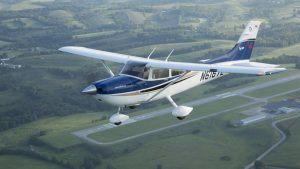