Call For Price
Cessna CJ2+
Click for Spec
Show all

History of the Cessna CJ2

The 2002 Cessna CJ2 is the third in the Cessna Citation Jet family of light business jets. Its predecessor, the CJ1 was launched in 1999, with improvements on the original CJ model. The CJ3 took over in 2008.

Take a look at AeroClassifieds used Cessnas for sale.

Looking to buy a Cessna CJ2? The specs are here

The Cessna Citation Jets are known for their high performance and low operating costs and the CJ2 is larger and faster than its previous incarnation, the CJ1. The cabin has been increased by 33 inches; the wingspan by 35 inches. The CJ2 can climb to 37,000ft in 17 minutes and Cessna increased the high speed cruising to 407 mph.

The CJ2 has an exterior height of 13ft 7in and a length of 42ft 7in. Its Cessna and NASA designed natural laminar flow wing span reaches 46ft and 11in and it has a T-tail. It has been designed to be flown with a single pilot, although it can be flown crewed.

The payload on the CJ2 was increased from the CJ1, with the maximum take-off weight rising by 1,700lbs. The two Williams FJ44 engines on the CJ2 deliver 2,400lbs of thrust each on take-off, which is 400lbs more than the CJ1, and it obtains a long range cruising speed of 352 knots once it reaches its maximum altitude of 45,000ft.  It has a maximum range of 1,700 miles while carrying four passengers.

Designed for business people who may wish to fly their own jet, the CJ2 has several automated systems and intuitive avionics. While retaining the low operating costs of the Citation range, the CJ2 has a larger range and a faster cruising speed.

Cessna CJ2s for sale can be found here

Need to sell a Cessna CJ2? 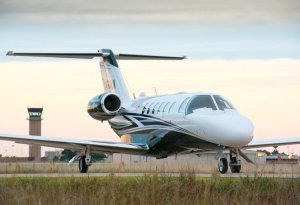