Call For Price
Citation Encore
Click for Spec
Show all

History of the Cessna Citation Encore

At the 1987 National Business Aviation Association (NBAA) convention, Cessna introduced the audience to their latest business jet. They were developing a stretched version of their popular Citation II, which was manufactured between 1978 and 1997. A prototype of this new small aircraft, the Citation V, had already completed its maiden flight earlier that year. It received FAA certification in December 1988.

In 1993 Cessna stated that they would be creating an upgraded addition to this Citation family: the Ultra. It was given more powerful Pratt & Whitney engines and Honeywell Primus 1000 avionics. The Ultra received FAA certification in June 1994.

Introduction of the Encore

The third variation of the Citation II, the Encore, was announced at the 1998 NBAA convention.

Sharing the majority of its build with the Ultra, the Encore benefited from new P&W engines and an updated interior.  It was also given trailing link landing gear and improved systems. The total fuel capacity was lowered by 360lbs, giving it a greater range than its predecessor. The Encore was certified by the FAA in April 2000 and the first delivery took place in September that year. The last Encore was built in 2007, after approximately seven years in production.

Following on from the Encore, Cessna evolved a fourth variant, the further improved Citation Encore+. This business jet was certified in December 2006 and delivered between 2007 and 2010.

Considering buying a Cessna Citation Encore? Find out more about its specifications below.

The Citation Encore stands at 15ft high and 48ft 11in long. It has a wingspan of 52ft 2in and 43 cubic feet of external baggage space.

The Encore’s speed can be attributed to both its wing design and its formidable engines.

In line with the Citations’ tradition of simplicity, the Encore keeps the straight wing that was successful on previous models. This was designed by aerodynamicists from both Cessna and NASA.

Pratt & Whitney Canada PW535A turbofan engines power the Encore. Each is capable of giving 3,400lbs of thrust, which is almost 400lbs more than the P&W JT15D-5Ds that were used by the Ultra. The PW535As also have 16% more efficient specific fuel consumption than the JT15D-5Ds.

The greater high altitude thrust of the engines means the Encore can climb quickly, reaching 37,000 feet in 13 minutes. This means a more comfortable flight for everybody on board. It can reach a high speed cruise of 436 knots and its long range cruise speed is 376 knots. The maximum certified operating flight level is 45,000 ft.

The smaller fuel tank meant that Cessna was able to fit a soft-landing, trailing link main undercarriage to the Encore. This helped to counter the feedback from pilots on earlier Citation models that landing could be clunky and stiff. Added to this is the narrowed wheel track, to ensure better ground tracking and more controlled landing in crosswinds.

At 17ft 3in long, the Encore has the longest cabin of any light private jet available on the market at that time. It is 4ft 8in in height and 4ft 7in wide. The interior décor, with its wall panels, indirect lights and well-placed mirrors, was designed to feel even larger than its volume of 314 cubic feet.

To add to the external baggage capacity there is also 28 cubic feet of easily accessible internal storage.

The seating is configured comfortably for seven passengers and two crew members. The swivelling club seats recline fully and a redesign of the cabin fittings has increased the headroom available.  A belted seat in the lavatory can be used for an eighth passenger. New service units allow for increased airflow and temperature control, meaning a more pleasant flying environment.

Each passenger has access to individual flat panel entertainment systems, accompanied by audio jacks and power outlets. There is also a MagnaStar 200 radio phone on board.

Despite being classed as a small jet, the Encore offers many facilities that are usually found on a larger aircraft. These include a full refreshment centre and an enclosed aft flushing lavatory.

The aircraft’s electrical system works as a reserve air conditioner on extremely hot days. This can be started while the jet’s on the tarmac, so the cabin cools before the engine is turned on.

The Citation Encore is fitted with the same Honeywell Primus 1000 avionics suite, radios and radar as the Ultra. However, the Encore was given a selection of upgrades to the cockpit’s equipment, such as the FMZ-2000 Flight Management System.

Four flat screens display flight information and the relevant controls for each are found on the screens’ faceplates. This ergonomic design is intended to improve the pilot’s hand eye coordination and flight performance.

The temperature controls of the Encore were designed so different temperatures can be maintained in the cockpit and the cabin. 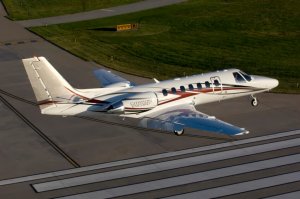