History of the Cessna Citation Sovereign

The Cessna Citation Sovereign is a business jet in the supermid-size range, able to fly coast-to-coast across the U.S. It was brought to the public’s attention at the Las Vegas NBAA exhibition in 1998 and first flew in February 2002. The Sovereign received FAA certification in 2004. It was later developed into the Citation Latitude.

Want to buy a Cessna Citation Sovereign? Read the specifications below.

The Sovereign is fitted with two Pratt & Whitney Canada PW306C turbofan engines, which each provide 5,600lbs of thrust when taking off. It can reach a maximum speed of 512mph and has a range of 3276 miles.

The Citation Sovereign’s cabin is 25.3ft in length, 5.6ft wide and 5.7ft high, with standard seating for nine and a maximum configuration of 12. There’s 35 cubic feet of internal baggage space, with a further 100 external. 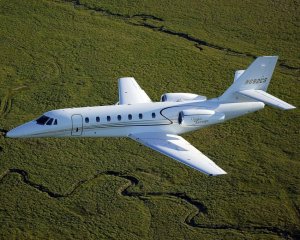