Call For Price
Global 5000
Click for Spec
Show all

The Global 5000 was launched on 5 February 2002 after being announced on 25 October 2001, with letters of intent for 15 aircraft. The first Global 5000 aircraft took flight on 7 March 2003. This flight tested basic system functionality and assessed the aircraft’s handling and flying qualities. The Bombardier’s Downsview facility was where the aircraft completed it’s preliminary testing, before it moved to Bombardier’s Wichita facility to begin the flight test program.

Typical configuration features 18 passenger seats with fully berth-able seats and an aft lounge or bedroom. The aircraft has two lavatories and a full galley. The crew rest area was removed, but is to be considered on newer versions. Eight to nineteen passengers can be carried. Its forward fuselage is shortened by 813 mm (32 in) and its range is reduced by 1,200 nmi. The tail fuel tank is removed and fuel is limited in the wings, MTOW is reduced by 5,500 lb (2,500 kg), some avionics are rearranged to gain usable cabin length. The interior completions allowance is 3,200 kg. 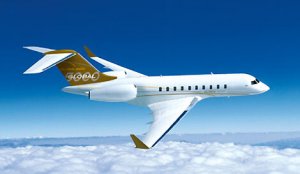