History of the Gulfstream G450

In the first half of the 20th century the Grumman Aircraft Engineering Corporation was renowned for producing heavy-duty warplanes. However, as World War II came to an end its co-founder, Roy Grumman, suggested that they change direction. His forward-thinking vision would eventually reposition the company at the forefront of a new genre of aviation.

In the late 1950s Grumman began manufacturing the world’s first purpose-built business aeroplane in the state of New York, U.S.A. The low-winged turboprop aircraft was named the Gulfstream I, after the Gulf Stream current, found off the coast of Florida.  This area was a favourite holiday destination of company executives at the time.

The company sold more than 200 GIs during its 11-year production. Its popularity encouraged the development of the jet-powered Gulfstream II at the beginning of the 1960s. On May 4 1986 the GII became the first business jet to fly non-stop across the Atlantic. Over 250 GIIs were sold during the time it was produced. In 1973 NASA bought two GIIs, modified to simulate space shuttle flight, in order to train their crews.

Further evolutions of the original GI followed and the company continues to manufacture pioneering business jets to this day.

The first Gulfstream G450 underwent its initial test flight in April 2003.  A successor to the G400, it merged the innovative tech of 2002’s G550 into the airframe of the 1985 GIV. It received upgrades that improved its aerodynamics, payload and range, including a wing redesign that improved drag and increased fuel capacity.

It received FAA certification in summer 2004, with the European Aviation Safety Agency validating this in November the same year. The first G450 came to market in 2005 and, in June 2011, became the first business jet to cross the Atlantic using biofuels.

Thinking of buying a Gulfstream G450? See its specifications below.

The G450 stands at 89.4ft in length and 25.2ft in height, with a wing span of 77.10ft. Its airframe is constructed from light alloy, with advanced carbon composite spoilers, rudders and ailerons.

The cabin has a height of 6.2ft, which means that most people will be able to stand up straight once inside. With a width of 7.4ft and a length of 45.1ft, this gives the G450 cabin a total volume of 1,523 cubic feet.

The standard seating configuration is for 14 passengers and two crew. This can be adapted to seat a maximum of 19 people. It can also be arranged into berths that will sleep six passengers.

There’s plenty of room for luggage, with 169 cubic feet of storage available in-flight. There are also two enclosed toilets, each with a full-length cupboard for storing coats or more formal clothing.

In the full-size galley you’ll find an oven, microwave, sink with hot and cold water, cold storage and coffee makers. It also has specific space for the bespoke dinner service that Gulfstream private jets come equipped with, This includes porcelain plates, cutlery and crystal glassware.

The G450 comes with everything you’ll need to work during the flight. The seven-channel Honeywell satellite communications system ensures fast WiFi speeds and a reliable telephone experience.

You’ll also benefit from a conference area, work tables, accessible power sockets, and a DVD and CD player, as well as two LCD screens. The integrated cabin speakers provide surround sound, when necessary. You can also access the audio system via the individual headphones that are connected to each seat.

The Gulfstream Cabin Management System gives you control of the different temperature zones, the lighting and the electronics.  There are several places throughout the interior where these controls can be accessed. The G450’s use of state-of-the-art textiles reduces cabin noise by 18% from its predecessor, making it easier to concentrate. Constantly refreshed air-conditioning and 12 large, heated oval windows ensure your comfort while in the air.

The ergonomic cockpit of the G450 is fitted with Honeywell’s Primus Epic avionics suite, which incorporates the Gulfstream PlaneView flight deck. A forward facing infrared camera is mounted under the jet’s nose, providing an enhanced vision system. This helps the pilot have a better understanding of the plane’s position and flight conditions at all times. It also ensures a clearer view of the runway markings and adjacent terrain during bad weather or at night time.

The four large liquid crystal display screens show all navigation, flight and system information. They also have Cursor Control Devices, with thumb-scroll wheels, attached to the outboard arm rests. This allows for easy scrolling and clicking through the systems data, checklists, flight plans and approach charts.

Need to sell a Gulfstream G450?

History of the Gulfstream G450 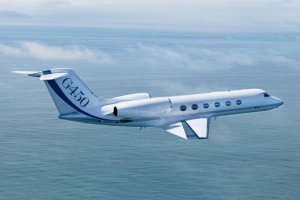