1971’s King Air C90 was introduced as the third model in Beechcraft’s 90s range of turboprop business jets, coming after the A90, the B90 and their variants. The C90 was adapted from its predecessor, the B90, with improvements made to the pressurisation, a modified cabin and two PT6A-21 engines.

2006’s C90GT is similar in most aspects but has more power coming from the upgraded PT6A-135A engines. The C90GTi was announced in 2007; again virtually unchanged but now with the next generation of Collins Pro Line avionics.

Thinking of buying a King Air C90? Discover the specs below.

The C90 stands at 35.5ft long and 14.3ft high, with a wingspan that has been increased from earlier models to 50.3ft.The C90GT and C90GTi have the same dimensions.

All three have typical cabin seating arranged for five to six passengers in a club style and all have a lavatory at the rear of the cabin and internal baggage space.

We have King Air C90s for sale here 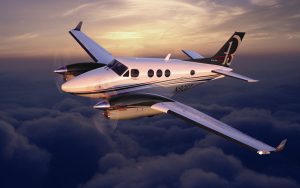