The Pilatus PC-12 is a single-engine turboprop passenger and cargo aircraft manufactured by Pilatus Aircraft of Switzerland. The main market for the aircraft is corporate transport and regional airliner operators. It is the best-selling pressurized, single-engine, turbine-powered aircraft in the world.

The PC-12 is a single-engine turboprop-powered business aircraft, designed for performing in multiple roles and to deliver equal performance and safety to twin-engine aircraft. It is powered by a single Pratt & Whitney PT6A-67 engine; early models are powered by the PT6A-67B, while the later PC-12 NG variant uses the more powerful PT6A-67P. According to Pilatus, the PC-12 NG has exceptional versatility and is capable of operating within the most rugged environments; moreover, PC-12 is one of the few pressurized turbine-powered aircraft capable of operating from rough landing strips.

The cabin interior of the PC-12 can accommodate up to nine passengers in a comfortable configuration, which includes features such as a refreshment centre, a fully enclosed lavatory, and a baggage area to the rear of the cabin. Furthermore, other cabin configurations include executive arrangements, seating between six and eight passengers, a four-seat passenger-cargo combi layout, and an air ambulance setup housing two litters and three attending medics.

The PC-12 incorporates numerous safety measures. The PT6A-67 engine has a reputation for considerable reliability, a factor that has reportedly been decisive to some prospective operators. Furthermore, to counteract stall and spin conditions, dual angle-of-attack sensors near the wingtips force the stick forwards in advance of a stall. For greater redundancy, the PC-12 NG has a complete split-bus dual electrical system as akin to modern jet aircraft; in addition to two separate batteries and a third emergency battery.

Search AeroClassifieds to find all Pilatus PC12 For Sale.  From our listings you can search, sort and compare all PC12 aircraft placed for sale globally.  If you wish to advertised your Pilatus PC12 aircraft for sale then please complete the contact form. 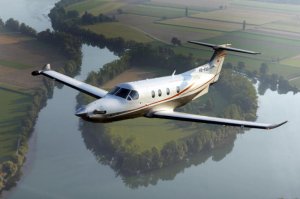